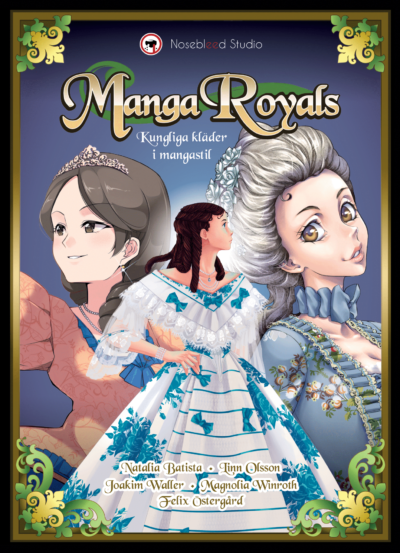 Manga Royals – Kungliga kläder i mangastil  is an illustrated book with pictures of Swedisg royals and the outfits they wore back int he day. This is the result of a collaboration with The Royal Armory museum in Stockholm.

Read it digitally in our app Nosebleed Manga!

In this book, you’ll find manga artworks of Crown Princess Victoria in the magnificent dress she wore at her son’s wedding in 1905 and Gustav III’s red and blue hunting garnment that was gifted to him when he visited France in  1771 – and so much more! Nine manga depictions of historical figures and outfits, depicted by five of the studio’s members and based on the real garnments in The Royal Armory’s archive. The book also contains two short illustrated tales about two of the garnments!

The artworks are also exhibited next to the actual garnments in at The Royal Armory in Stockholm, displayed for one year with the start in November.