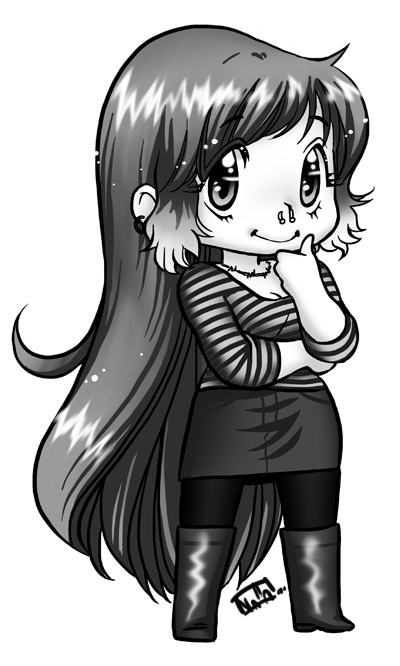 I studied comic art at Serieskolan (Comic Art School) in Malmö 2005-2007.
Got my first published comic Lova in Okej magazine (a Swedish music magazine for teens) in 2006-2007.

During my time at Serieskolan, my comics Prinsessan och fröken Näktergal (The Princess and Miss Nightingale) and Synth Master J got among the 10 finalists in the Swedish manga competition Mangatalangen 2006 and 2007.
At that time, I also worked as a comic art teacher at libraries, art galleries and schools, and also as the teacher for the summer course at Serieskolan in Malmö 2007-2009.

In spring 2009 I self publiched my own manga book A Song For Elise and sold it at fairs and conventions in Sweden, Denmark and Finland.

In spring 2010, my childrens manga Mjau! got published by Kabusa Böcker. It is a 4-book series about two kittens (portrayed as children) playing around, going on picnic, hunting ghosts and getting new friends. The manga has since then been published in Portugal, Germany and the US.

In fall 2010, my manga “A Song For Elise” got translated into German and published by Tokyopop, with the title Ein Lied für Elise. At that time I was also illustrating the Swedish children books series Häxfolket by Jo Salmson, published by Bonnier Carlsen.

Between 2013-2015, I made my genderflipped fantasy manga Sword Princess Amaltea, which was published in 3 volumes by Swedish publisher Kolik Förlag. It has since then been released in Italy, Germany, Czech Republic and the US.

Starting Fall 2018, I will together with Elise and Magnolia teach at the Swedish distance course Mangaskolan, focusing on the technique of manga story telling.